LADY LITCHFIELD LOVE, EMPRESS OF BORDEAUX, WEARING HER STUNNING CROWN AND COLLAR OF EXOTIC FLOWERS DESIGNED BY THE FAB-FOUR PIGGIES

This spectacular amuse bouche is being held in honour of the awesome animals who united in a spectacular display of courage and conviction in order to, they believed, rescue a dog in need.  Mollie, the “damsel in distress”, turned out not to be Dapper Doggy’s hostage but was, rather, cavorting around Vegas with the Errant Easy, who’s ransom note had demanded Lobsters? In the words of the The Colonialist “What Mobster wants Lobster?”

Festivities had been planned for the safe return of Mollie but, due to her somewhat less than desirable conduct, the reunion party is now officially a Meandering Mollie Party!

The Guest of Dishonour Honour, Mollie, arrived in South Africa in great style, aboard a yacht and, to the shock of all concerned, was travelling with, not only the always Admirable Alfie but, also, with the Errant Easy, who had been the cause of her fall from grace.

After having managed to cover her skimpy yacht attire and don a more fashionable evening gown, she strode down the red carpet, totting her clutch bag easily in one paw and, briefly, behaving like a true lady. 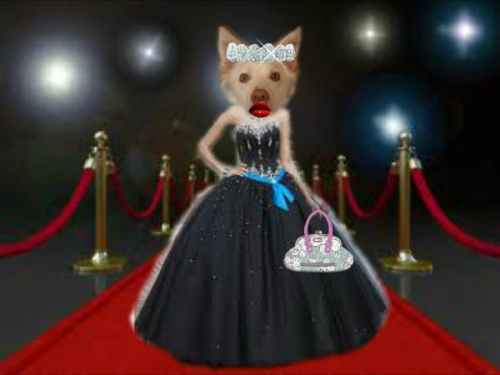 However, after a few bottles glasses of Bordeaux’s finest wines, the true Blonde Vixen returned.  You tell me – Damsel in Distress or Overly-Vivacious Vixen? 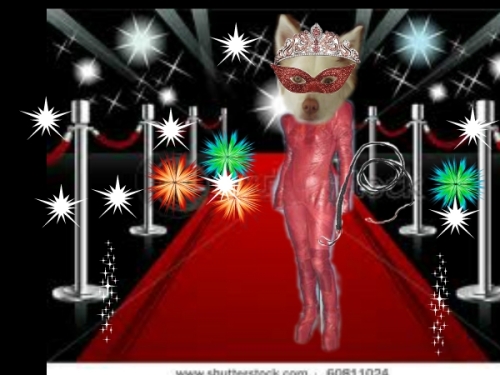 No wonder the Errant Easy was unable to resist her wily ways and left Litchi to lament her loss.

Errant Easy, for his part, arrived with great aplomb, swaggering down the red carpet sporting his finest tuxedo, which we later found out was not un-buttoned due to his desire to appear casually elegant but, rather, due to having over-indulged in ice-cream!  Mollie and Easy continued to flaunt their flirtatious fling, dancing the night away with abandon.  We believe that they make a perfect couple!

Dapper Doggy, being in great favour with Lady Litchi (having bestowed upon her the title of Empress) arrived looking splendid in his cravat.  However, having now conquered the majority of the world, he finds he now requires his blonde wig disguise in order to throw off the paparazzi.

Princess Zena arrived in perfect Royal Style, carrying her crown on her head with the ease of one born into high society and impressing all with her jeweled gown.

A few glasses of delicately sipped wine soon dispelled her inhibitions and she transformed into a most lively Cleopatra, with whom the Dapper Doggy found himself quite taken.  It would appear that love may be in the air.  They do make quite the perfect match!

The world renowned Gallant Guinea Pigs, whose latest line of fashion design was being sported by Lady Litchfield, were looking grand in bow ties, top hats, tie clips and bowlers.  All party attendants were in awe of their finesse and the fabulous team of Nibbles, Nutty, Buddy and Basil astounded everyone by offering, to the blogosphere, their talents for any future festivities whom anyone may be attending. 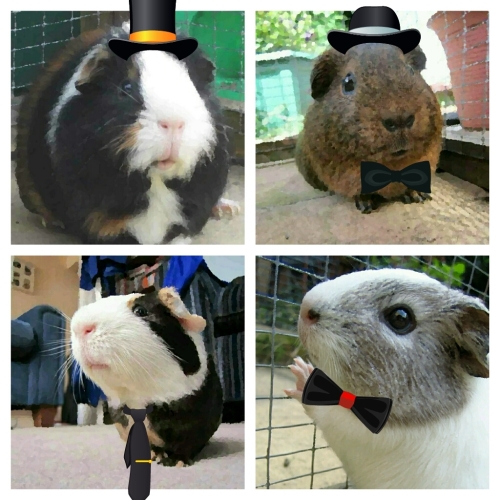 Sagacious Sammy, strode in with the confidence of a world leading Judge, decked out in his finest court robes.  He looked poised and elegant and immediately caught the eye of Shadow (who’s picture we cannot display as she refused to displace her perfect hair with a gown of any nature).  The little Charlatan Shadow would like, however, to convey to Judge Samuel Kimmell, her delight in having met such a handsome cat.

Sammy, for his part, soon forgot his legal background and changed into party gear, with the assistance of the Fab-Four Piggies and became the life and soul of the party, masquerading as Captain America.

Madame Misaki, elegantly draped in beautiful shades of blue, was one of the few who managed to retain her dignity during the festivities.  Empress Litchi was greatly impressed and thoroughly enjoyed her company, although she is wondering what might have happened to her Kong?

Every party has to have one!  The rule breaker.  Rebel Ruby provided the true shock factor for this affair, arriving perfectly naked!  Mollie had quite a time holding onto Easy at this point.  Rebel Ruby, in retrospect, was probably the cause of all the hilarity and general misdemeanors of what turned out to be quite the swinging party!  Thanks for bringing so much fun to all – Rebel Ruby!

And then, the moment Lady Litchfield, Empress of Bordeaux had been waiting for.  The arrival of Jetty the Gentleman!  Jaunty Jet arrived in the style of a true Gentledog, comfortably bearing his bow-tie with dignity and ease.  Lady Litchi was instantly smitten.  Her mysterious, dark haired rescue dog had finally arrived to quell her once aching heart.

At this point, as we are aware of the media desperately seeking out juicy stories, we can reveal little else but, if you look at the true delight and enchantment displayed by Litchi, I think one’s imagination can conjure up the rest! 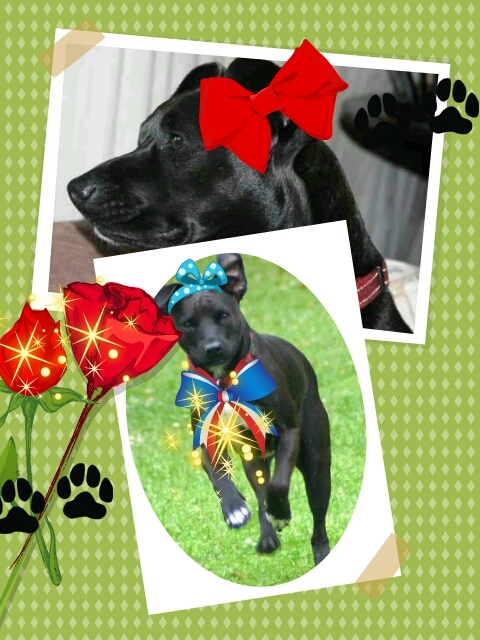 LITCHI, BEARING HER PATRIOTIC COLOURS OF RED, WHITE AND BLUE, BOUNCING FOR JOY