Yes, we’ve ascertained that Sabre is fairly fond of little Pixels.  However, no matter how cute you may be, there are certain sibling duties which need to be performed.  Annoying big brother is a vital skill to acquire.

“Big Brother Bug” is a great game and crucial to boredom avoidance.  It is particularly effective if you can find Big Brother already ensconced in a nice, deep slumber. 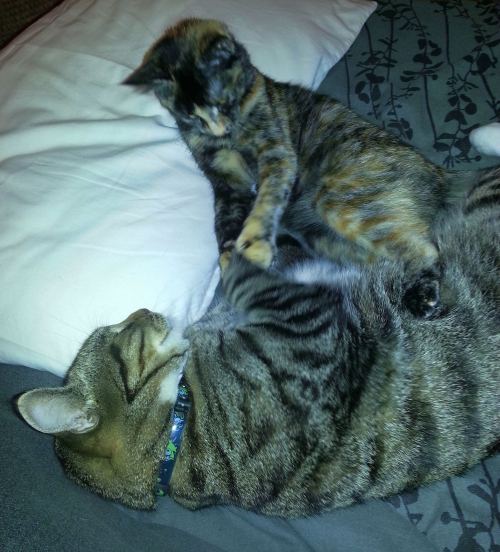 Step 2 – Pretend it wasn’t you.  Try to embellish your face with the most innocent of expressions whilst looking the other way.

Step 3– Give his toes a good sniff.  If nothing else, the tickle of your whiskers should help wake him.

Step 4– Get distracted by his now wonderfully swishing tail 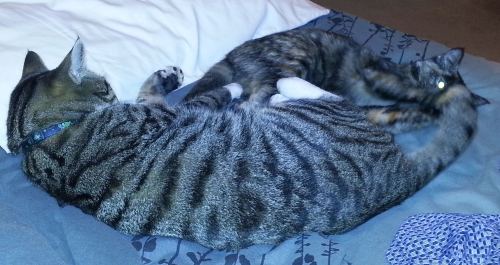 Step 5 – Do the unthinkable.  Sniffing his…um…nether regions is sure to get his attention 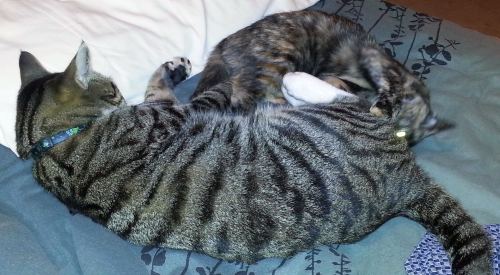 Step 6 – Receive a good clobbering for that gesture 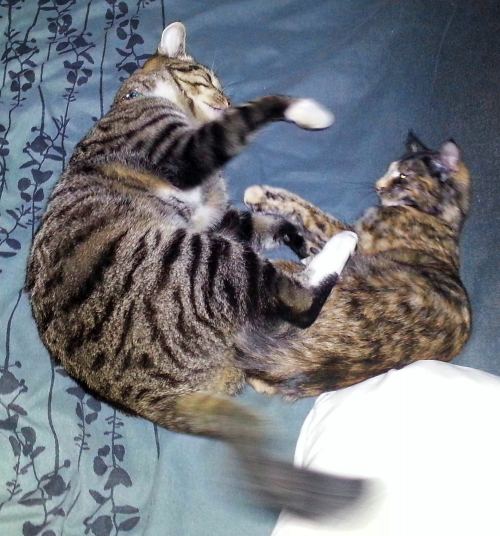 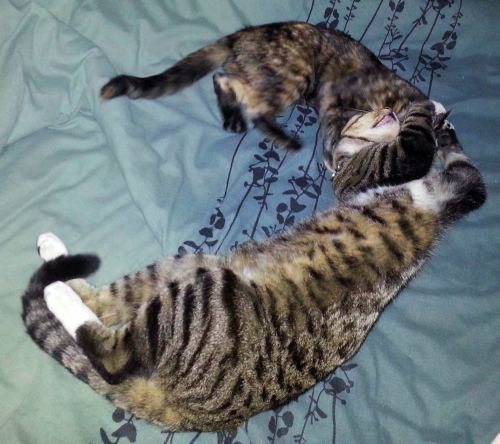 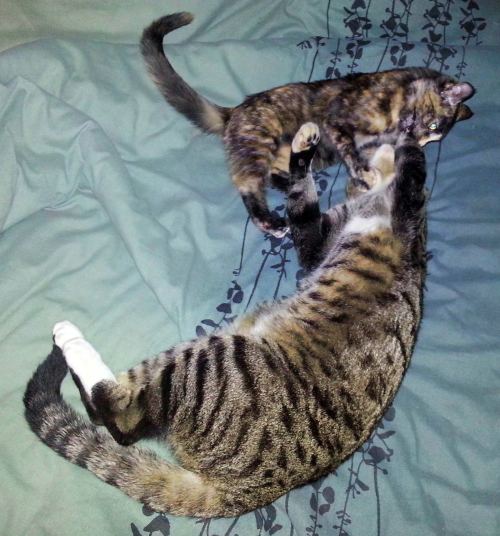 Step 9 – Great, now you’ve got his attention and can settle in for the ultimate huggle bunnie sleep with big brother. 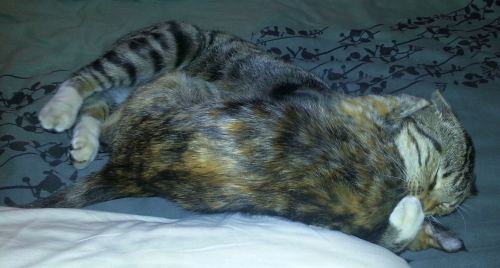 Even Sabre is powerless to resist the charms of Pixels

To begin with, he was far from impressed.  Remember, Sabre is my ultimate Baby Boy.  He believed this to be his universal right and took to Pixels much like an ostrich takes to flying.

Of late, however, I see even his resilience has crumbled. 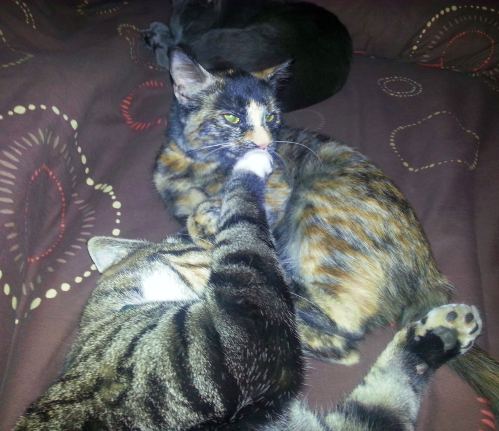 Come here Pixels! I need you for sleep time

These photos may be poor but they are irrefutable proof that even Sabre likes the idea of cuddling and touching her when sleeping.

Getting ready for the cuddly curl-up 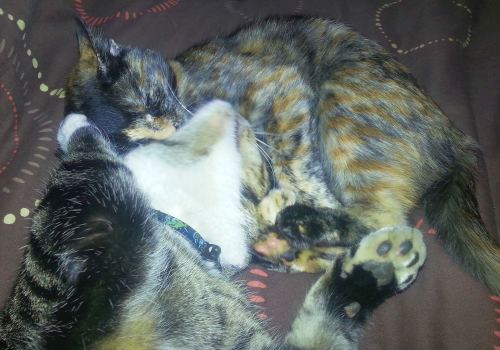 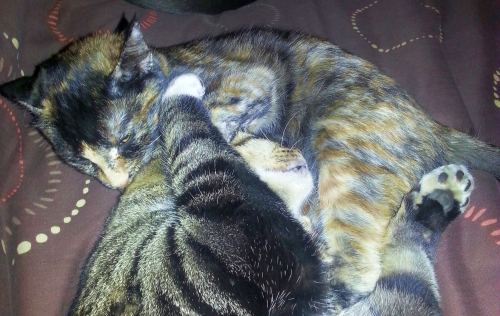 As we begin to regain our credit giving strength, our gratitude to the following, for their tireless efforts in tweeting and facebooking Pixels competition attempts, needs to be shared:

Please visit both these sites, as they are on a most awesome mission, running raffles and auctions to raise funds for Leo, who’s story can be found on Savannah’s site.  Please support them in whatever way you can.

It’s Good To Have Friends In High Places

Remember poor Sabre, all ready for an outstanding camping trip with Sammy and his friends?  He was stuck at home due to his dim-witted, excuse-filled Mom.  Well, the Stupendous Sammy came to the rescue!

Being unbelievably well connected, Sammy organised for the FBI (Feline Bureau of Investigations) to send their Jet, normally reserved for VIPs (Very Important Pussies), to collect Sabre and fly him directly to the camp site.

Not only that, but he also made sure there was a professional photographer on board, who sent Mom proof that little Baby Sabre was, indeed, in extremely good paws.

Sammy pulled out all the stops on this one!

Just look what Sammy did.   An FBI Jet, filled with food, toys, tents and pretty much anything any VIP camper could ever hope for.

Thanks Sammy for a terrific time.

Mothers can be so cruel to their babies

Baby Sabre is devastated.  Sammy is throwing an awesome camping party, including forests and beaches and all our bloggy friends.  Mom, being the slightly challenged blonde that she is, didn’t get anything organised in time for Sabre to join in the fun. 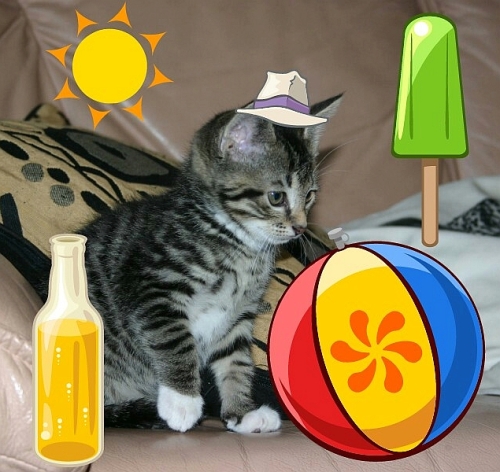 All dressed up and nowhere to go!

Here he sits, all ready to go but too late to catch the transport.  He has his drinks, his lollies, his beach ball and even organised for the sun to come out (for which, of course, as a responsible baby, he is wearing a protective hat).

How absurd is it, that Mom cannot find photo editing software she can use on her PC but found something on her phone?

So Tired Of Listening To Pixels!!!!

Sabre didn’t go to the Valentines Ball.  Pixels did.  It’s all she talks about now.  Sabre is just so tired of listening to it all!

Oh for the love of catnip, could you please stop talking now!

He’d also like to point out that he can also do the “Super Cute Sleeping” thing.

Can a Cat be as Big as a Queen?

Since when can a cat stretch to That Length?

It’s supposed to be my bed as well, you know!

Back to the Middle

Jumping back to the middle (I’m not making you go back to the beginning – that would be absurd) Sabre, my “baby boy” arrived at Cat-A-Holics rescue shelter, with 2 other kittens, all only 4 weeks old.  To the rescue Bat Man (oops, Cat Woman)!   So to the rescue I went, selflessly abandoning all else.

I named her Ashley – she’s was the colour of ash

The deal was to take them in for 4 weeks, bottle feed them, ensure they were strong, healthy and well socialised before returning them for adoption.

Take a look and tell me you wouldn’t end up keeping at least one!

Am I cute or what?

At this point, I have my adopted adult cat, Jangles and things are going far from well with her and my dog, Litchi.  I told myself, firmly, that I had quite enough animals and would definitely be able to return all the kittens.  So I plowed on into the milk mixing, bottle feeding, sterilizing bottles, mix milk again, feed again, sterilize again routine.  I’m sure, at this point, you feel extremely sorry for me.  It is a nasty job, having to play with baby kittens – who can handle it?

Then I began the socialisation, making sure they were held by all ages, sexes and nationalities.  More terrible work – I had to have friends round and introduce them to cute kitties.  Poor friends – they hated it, especially the kids!

In amongst this, dog socialisation was necessary (only to ensure that, if they were to go to homes with dogs, they would be alright – not because I was keeping any of them).  Out of their room they came.  Litchi approached with her usual response to cats, which was to pounce and bark simultaneously.  Two kittens immediately tried impersonating a witches cat, with arched backs, hair standing on end, hissing and side stepping backwards (awfully cute to watch in a 4 week old).  Sabre, on the other hand, look quizzical and strutted straight up to her with a “let’s play” attitude.  Litchi was shocked.  She froze.  Then she obviously thought she may as well introduce herself properly and there we had it, my dog now loved a cat and “forever brave” Sabre had found his new best friend.  I assume you’re guessing how “taking them all back” went?

Who would have thunk it – my dog is friends with a cat!

The Happy Tails ending happened for all of them.  Sabre, naturally, had found his forever home in my heart and house.  On the day I returned the other two, a woman came in specifically to adopt the one (the little, beautiful grey kitten).  She brought her young son – bad mistake.  Once they realized that, by taking one, the other would be left alone, they became determined to take both.  Dad had, apparently, told them “only one!” (he had evidently been very firm about this).  So Mom devised a plan.  She assumed she would not be able to convince Dad and explained to Son that he must phone, saying “it’s imperative that we take both”.  Son did as he was told.  He phoned Dad and said “it is IMPERVIOUS”!  I don’t think Dad could say “No” through his laughter and the kittens had a brilliant forever home, having spent only 1 hour at the shelter.

Now that’s what I call a Happy Ending.

The other day, Raising Daisy at http://raisingdaisy.wordpress.com wrote an article in which Stink Bugs were featured as a toy/irritant/nightmare for Daisy.  It got me thinking.  Well, of course it did, bearing in mind that each incident in my life is now inadvertently converted into blog format.  Anyway, it had me remembering a scenario a couple of years back.

My neighbour’s place had been broken into.  No-one was home, so I called the police who, somewhat remarkably, came rushing around.  As they approached my residence, I heard a truly blood-curdling SCREAM emanating from her house.  Now I know there are “baddies” out there and my adrenalin starts to pump.  I rush instantly to my neighbour, ready to rescue the damsel in distress from lurking danger.  I have no idea what I planned to do (maybe slap them about with a powder puff or something).  The police, weapons drawn and all action / tough-guy demeanor, rush the place from behind me.  We are all ready, guns and powder-puffs blazing, to take on the criminals.  It turns out that my neighbour had returned home, just minutes after my call to the police, completely unaware of the break-in which had occurred on the other side of her premises.  On stepping into her entrance hall, she had been confronted with the greatest terror Johannesburg has to offer.  Fly the crime, fly the news reports any international reader may have seen.  She had stumbled straight into the path of a PARKTOWN PRAWN.  She could care less about the pending doom of criminals.  All she could think of was getting the police to rid her home of the creature.  The police were flabbergasted.

These are the most frightfully fearsome looking creatures, that have a nasty habit of jumping stupendous heights and lengths to land their horribly spike covered legs into your flesh.  Just creepy!

I found a rather amusing write-up on these spine chilling creatures at http://www.whatsupjozi.com/2012/jozi-joburg-info/the-legend-of-the-parktown-prawn/818 The picture is courtesy of this webpage. 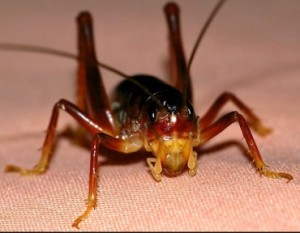 Joburg resident in terror after intruder invades her home

I know, I know, this appears to have nothing to do with pets.  However, never fear, there is a link up.  It follows into my latest money making scheme.  I have decided to rent out my fear-deficient husband and mad Baby Boy Sabre cat.  Sabre seems to think that Parktown Prawns are the best toy nature ever invented.  Being the perfect hunter that he is, he catches them and then, to amuse himself and terrify his mother, he brings them inside where they pounce and perform around the place whilst he gets to play hunter over and over again.  I react like any other level-headed, responsible mother by screaming for hubby, whilst performing death defying acts of gymnastic proportions to avoid the onslaught of the enemy.  My fearless husband (bless him) is the first person I have ever encountered that does not mind these creatures.  So, with Sabre’s instinctive ability to catch them and hubbies fearless removal thereof, I find my garden no longer a resting place for evil creatures with more than four legs (anyone who knows me or has been reading this blog will know that, although I love animals, my loves limit is reached at 4 legs and anything beyond that has me turn instantly into a real girl).

So, here’s to my latest “get rich quick scheme”.  All I have to do now is convince my husband to be a “man for hire”.